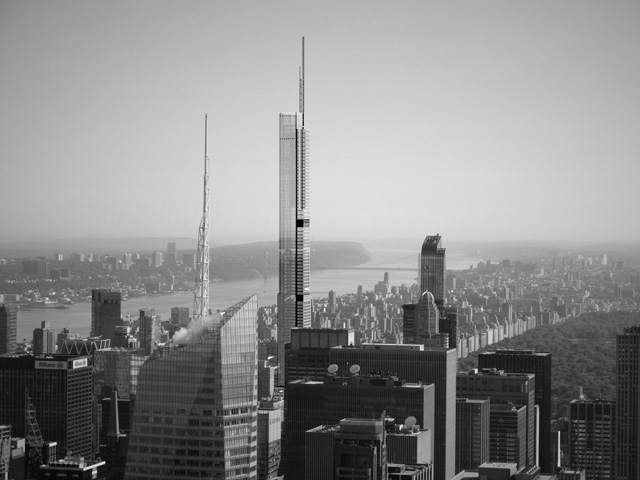 Today society’s tendency to sanctify wealth and celebrate the super rich is also the bane of the 99%. A recent op-ed in the New York Times by Nicholas Kristof, titled ‘Inequality Is a Choice,’ stated that in 2014, consolidated end-of-year Wall Street bonuses were twice the total annual earnings of all Americans working fulltime at the minimum wage. I have a client from that culture who makes an annual wage of $650 million.  That is approximately $1.4 million per day. We might consider this astonishing inequal income has begun to take architectural form.

The spire towers of medieval San Gimignano were also privatized and built by warring family clans who went so far as throwing hot oil down from their houses’ narrow tops (they too were profane spires). Today though, the San Gimignano towers appear quaint and mysterious.

New York City is now building architecture in the form of ultra-thin spires on 57th Street. For a moment, let’s look back at Manhattan’s architectural past. In a view from 1834—the year Richard M. Upjohn finished the Trinity Church—the city was one of spires, but each spire stood to express a sacred cause and spiritual dimension.

If we fast forward to Manhattan in 1934 and buildings like the Rockefeller Center, thin and vertical architecture marked great public urban space; the Empire State Building’s vertical dominance offered a public observatory deck.  No such public space will be offered by our present privatized spires.  Not only do they deny public access to the top and cast long shadows on the street, they will seldom be occupied, as their $90 million apartments are financial instruments, not really apartments for everyday life. Many of these profane spires have been built with tax abatements from our once public-oriented city government.

Architecture is the greatest tool available to our species. Our lives are lived within the urban framework we construct. As Churchill said, “We shape our buildings; thereafter they shape us.” Our choices today give shape to future generations.

We are doing something quite different with New York City at the moment. What will future generations think about our present thrust? What will future philosophers write about our current ongoing Manhattan spires? Loftily idealistic? Built for harmonious urban living?  Built by a stable society formed by women and men who profess the worship of wealth? Carpe diem—seize the day—certainly applies to our developers.  However, we as citizens might prefer Ars longa vita brevi—Art is long, life is brief.

P.S.  Our Hunters Point Community Library just broke ground on Saturday, May 16th and promises to be a little engine of public space.