FUNDAMENTALS: JUST FOR THE HELL OF IT 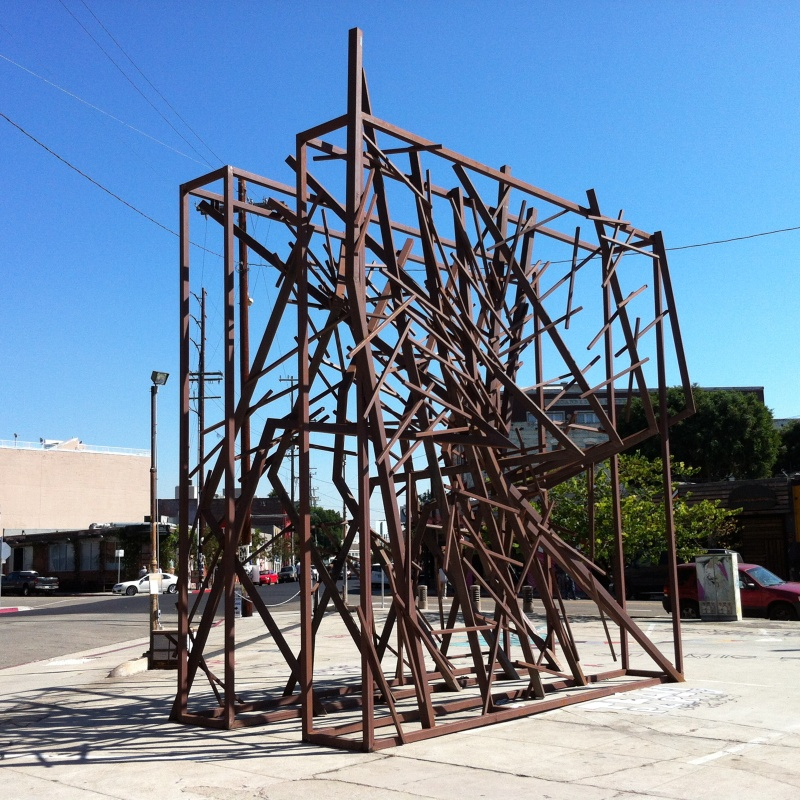 "there has to be a kind of speech

beyond naming, or even praise,

that locates the light and lets it go."

It has been a year since Lebbeus Woods passed away in his New York City loft during the Superstorm Sandy. For most of us, Lebbeus always existed—as an idea, a precept— well before we knew him and will continue to exist through his muscular output of drawings and writing. He often spoke about the ability of ideas and concepts to outlive their creators through intensive research and reinvention on the part of present and future generations. We can rest assured that his vastly profound contribution to not just architecture, but to the advancement of humanity en large, will live on beyond all of us. In Lebbeus’s future, it is not going to be an easy, sparkling journey through an ambrosial utopia. A lack of challenges was considered to be a crisis; there were no days off for Lebbeus.

In his drawings, beyond the almost frenetic perspectives and seemingly indecipherable alphanumeric lexicon written with the same intensity as a line itself, another ubiquitous characteristic is the multiple notes on the back of each drawing marking the preferred scale for exhibition or publication. The numbers are precise and varied (176%, 147%, 138%, etc.), rarely marked at full-size (100%), removing the periphery and placing the viewer in the center of his ideas whether one asked to be or not. This confrontation was not a visualization of his ego, but his steadfast guidance into the unknown—the Virgil to our collective Dante approaching the entrance to a complex Hell in the Gustave Dore engraving.

Deeply embedded in Lebbeus’s immense body of work was the question “What is architecture for?,” a challenge put forth to the discipline enlarge much like Leibniz’s “Why is there something rather than nothing?” This was not a question broadcast from an unquestionable inselberg of thought, but a deeply plumbed fount of parallaxic responses to his question, attacking it from every side with an all-consuming desire.

In order to talk about what we left behind in Los Angeles, we must be aware of what has gone missing. The presence of Lebbeus’s absence is large and complex, full of a wide range of projects and writings dealing with questions both ancient and completely urgent: Sarajevo, Cuba, Cooper Union, Chengdu, Lower Manhattan, San Francisco, Reggio Calabria, SCI-Arc, Berlin, Paris, Vienna... The rusting of steel members of the structure are more than a metaphor for Lebbeus’s absence, it's a physical representation of his output: it has ceased, but still maintains a PRESENCE. The energy of resistance is slowly rusting. The presence is that of a great loss.

The Earthwave is a short, yet intense, walk through a Lebbeus Woods drawing—a true entrance into the previously mentioned center. The steel members harness the intangible in order to allow for the brief, yet triumphant, inhabitation of the city’s energies—the physically immeasurable—brought to life within the confines of the rust-driven coalescing of vectors and forming an inhabitable whole from the three separate systems. The completion of this project highlights, while never fully answering, Lebbeus’s questioning.

The Earthwave can also be read as a cut through time itself—in a similar fashion to the marble walls in Mies's Barcelona Pavilion—a compact and precise delineation, sectioned from the boundless, and sited in order to experience an admixture of the past (the frames, anchoring and grounding), present (primary members, largest and most tangible), and future (large possibilities exploding from the coalescing of the past and present).

The fabrication was fueled by a spirit enamored with not just the experimental, but with the act of making. Produced by a team of dedicated students from several institutions, the construction was the earnest effort of a group reveling in the act of building a piece of work largely thought to be unbuildable. This project was borne from a particular spirit and was completed, transported, and sited in order to keep Lebbeus’s teachings alive. No matter how temporal the materiality, the essence of the work will return eternally.

The Earthwave was designed by Lebbeus Woods and Christoph a. Kumpusch in collaboration with Adam Orlinski as an entry in the 2009 Biennale of Architecture and Art in the Mediterranean.

The Earthwave is part of the LEBBEUS WOODS IS AN ARCHETYPE exhibition at SCI-Arc, and currently on view at E 3rd St. and Traction Ave. in downtown Los Angeles’s Art District. It will be moved to a permanent location later this year.  The project team consisted of Adam Orlinksi, Ali Fouladi, Ryan J. Simons, William Orlando, Cecil Barnes, Carlos Rodriguez, and Joe Jacobsen under the direction of Christoph a. Kumpusch.