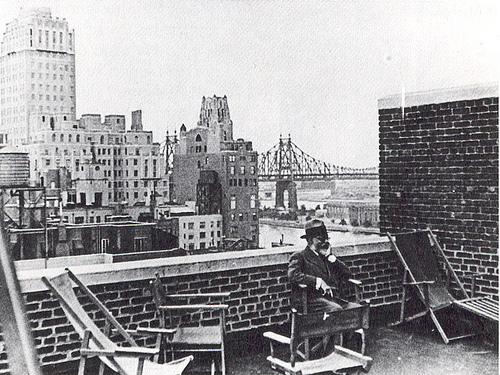 The world is the product of thought in general; in other words, precise imagination.

Born December 31, 1869 in a weaver’s cottage with a dirt floor in Le Cateau-Cambrésis, Henri Matisse began painting in 1889.

From the moment I held the box of colors in my hands, I knew this was my life.

I threw myself into it like the beast that plunges toward the thing he loves.

Until February 10, 2015, at MoMA we can see the largest exhibition ever assembled on Matisse’s cut-outs done in the last decade of his life; it is amazing to see the energy in the huge cut-outs he made in his final years.  After cutting the hour long line due to my Artists in the Collection pass, I entered the exhibition and was shocked to see the extraordinary size of the original works—the restoration of the wrap-around room, The Swimming Pool from 1952, on burlap is especially inspiring!

In his final years, before dying of a heart attack on November 3, 1954, at the age of 84, Matisse also designed and realized the architecture of the Chapelle du Rosaire at Vence.  He used the cut-out method to design the stained glass windows and the chasubles for this amazingly intense interior.

A symbiosis of Painting and Architecture, this chapel, with its fusion of light, color, material, and reflection, has an interior of immeasurable intensity.

Matisse worked and reworked his designs for the chapel, scrapping his first plans.  He studied its space in large models and made full size mock-ups of its main elements.  He drew directly on ceramic panels, many of which he later scrapped.  In many ways, Matisse’s Chapelle du Rosaire—a work of architecture with studied reflections—is his culminating work.

After visiting Henri Matisse: The Cut-Outs twice (I have also visited the Chapelle du Rosaire twice) it is the zeal and optimism of Matisse so powerfully communicated in color and space that is so unforgettable in this exhibition… as optimism that should be carried on into the 21st century.

In 1953, a year before his death, Matisse wrote about “looking at life with the eyes of a child.”  He elaborated on this reflection when speaking on the Chapelle du Rosaire:

Colors and lines are forces, and the secret of creation lies in the play and the balance of these forces…to achieve that balance of forces, the blues, the greens, and yellows of the windows compose a light within the chapel, which is not strictly speaking, any of the colors used, but is the living product of their harmony, their mutual relationship.

This color-light was intended to play upon the white field embroidered with the Black lines of the wall facing the stained glass windows on which the lines are purposely set apart. Throughout the chapel, there is not a single detail that doesn’t contribute to that impression. 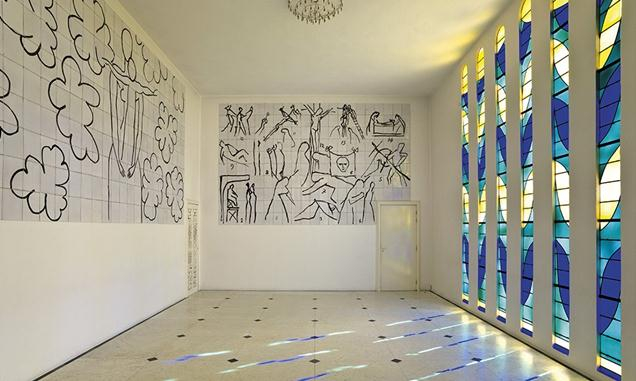 The power of Architecture does not depend on bigness, it depends on intensity.  In the chapel at Vence, Matisse as an ARCHITECT realized an ineffable space of astonishing intensity.