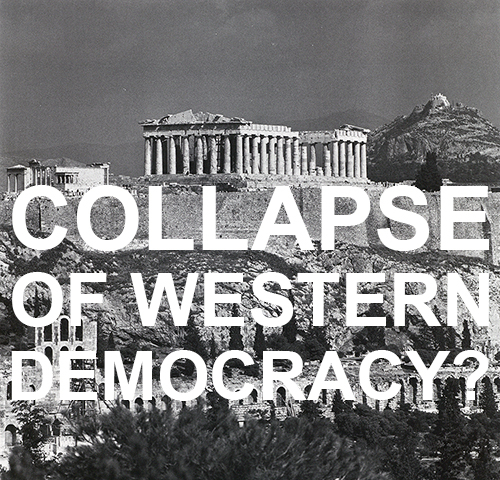 Democracy originated 2524 years ago in Athens, when the city had a population of +/- 250,000. There, the Greek word δημοκρατία: δήμος ‎(dêmos : "assembly of the people”) +‎ κρατία ‎(kratía : “power”, “rule”), was first used; however, not everyone could vote! Debate was open to all but decisions were taken by an educated quorum of 6000.

What we are experiencing in 2016 is a kind of collapse of western democracy. Rather than a lesser country collapse under political violence or economic crises, this is a media-induced collapse. As we know media can be purchased and its hyper-speed in our present time can change opinions overnight. The formula for this collapse might be:

The FBI directors’ resurfacing of criminal suspicion on Hillary was blitzed by the media a few days before the election. This blast was just enough to sway a gullible population into a Republican vote. In a way, this is a mere detail compared to a tycoon who outrageously pays no US income tax! Timing, however, in a media induced shift, is everything. If the sexist statements of the Republican elect had been released 10 days before the vote, the election would surely have been swayed to the Democrat.

Today, I read that Hillary Clinton’s popular vote leads by over 2 million! The Electoral College system allowing the Republican win by 270 votes is an antiquated and absurd Republican tool that should have been eliminated in the election of 2000 when Al Gore won the popular vote. Resultant of this system, and contrary to the American people's majority vote, we are left with a “president elect” that seems to be an anti-intellectual, racist, bigot who vows to dismantle the Environmental Protection Agency because he thinks climate change is a hoax.

We have to organize and resist—it’s difficult to run away as the world is at stake—and future generations will thank us for fighting this.

In our studio, it takes an average of 8 years from the first sketch to the realization of a work of architecture. A building should last at least 100 years—so we stay dedicated to architecture for the long run.

This is a very absurd moment in the United States of America, but it will only last 4 years.  Mussolini was in office 20 years—we will get through this.