A LETTER TO LE CORBUSIER

Today, August 27th marks the 50th anniversary of the drowning of Le Corbusier in the Mediterranean Sea.  Currently at “T” Space gallery in Rhinebeck, we have an exhibition of the last collaborator of Le Corbusier and José Oubrerie showing three buildings and three paintings.  For this exhibition, The Chapel of the Mosquitoes I wrote a late letter to Le Corbusier as follows:

Your dedicated and passionate employee José Oubrerie has just promised me he will be showing three projects and three paintings at an exhibition that will be opening July 11, 2015 at our little gallery in Rhinebeck, New York.  I don’t think you ever saw his completed version of your amazing Church at Firminy—truly an astonishing space of spirit-filled light that opened finally in 2006 with José’s dedicated completion of the design.

Église Saint-Pierre of Firminy, as you conceived it, was key to the Model City sector of Firminy Vert, but construction didn’t begin until 1971, six years after you drowned at Cap Martin.  It was stalled due to political squabbles from 1975 to 2003, but when the project was declared “heritage” architecture, it was financed and completed.  I had seen its 1970’s foundation in ruin, so was overjoyed to attend 2006’s opening events.  The Light and Space inside are truly spectacular.  A World Architecture Survey in 2010 ranked your chapel second in the Most Significant Work of the 21st Century category.

I have just returned from seventeen days in India where I had the chance to visit your amazing work in Chandigarh and the four buildings you made for the city of Ahmedabad.  In Chandigarh, the High Court was in session and one of the judges was happy to stand for a photo with me.

I walked your Trench of Consideration to stand below your monumental sculpture Open Hand, which they finally built to your specifications in the 1970s.  However, the city blocked people from gathering there for many decades.  On January 29, 2010, Chandigarh’s government lifted the ban on social gatherings at the Open Hand, allowing the area to be open to citizens daily between 10:30 am and 3:30 pm.  When I sent a photo of myself at your Open Hand to José he texted back “Tell them to add the colors Le Corbusier wanted!  I can send them if they don’t have them!”.  You would love the technology we have now to instantly send photos and texts across the globe (but I would bet if you were here now you would still carry your sketch book!).

In Ahmedabad I had the great opportunity to meet Balkrishna Doshi, your dedicated Associate for Indian projects who, at eighty-seven, is in good health with amazingly clear memories.  He told me how you wouldn’t show up at your office at 35 rue de Sèvres until 2:00 pm, after spending your mornings writing and painting.  He also told me about the dinner in Ahmedabad where in a single meeting regarding the Mill Owners' Association Building—still looking spectacular today, by the way—you agreed to do all four of your projects in the city.  I saw they are restoring the paint colors in your Villa Shodhan, which looks striking with its roof gardens grown in lush and green.  I am sad to report that the Sanskar Kendra Museum is in shabby disrepair.

Doshi told me he tried several times to arrange a meeting between you and Louis Kahn who truly worshiped your work.  Doshi, in fact, drew Louis Kahn to come to Ahmedabad to design the Indian Institute of Management using visits to your great works there as an incentive.

In August of 1965, days after you departed this world, Doshi stopped in Paris at 35 rue de Sèvres to pay his respects on his way to Pennsylvania to see Louis Kahn.  When he arrived in Philadelphia late on a Sunday afternoon, he went directly to 1250 Walnut Street, rang the bell, and caught the keys that Louis Kahn threw down to him so that he could enter the office.

Opening the door Kahn said, “Have you heard about Le Corbusier?”.  Doshi replied, “Yes, I am just coming from there.”  Kahn, seated at his desk with a bottle of Aquavit said, “Now for whom should I make my work?”.

Your former employee Paffard Keatinge-Clay wrote to you in 1999 telling you:

But what are you most famous for today, my great master? Outside the closed circle of Architecture, it is for the Chapel of Notre Dame du Haut. Not because it is a rule to be followed, but because it strikes directly to the heart of all people of all beliefs, of all ages, and it will be forever so. 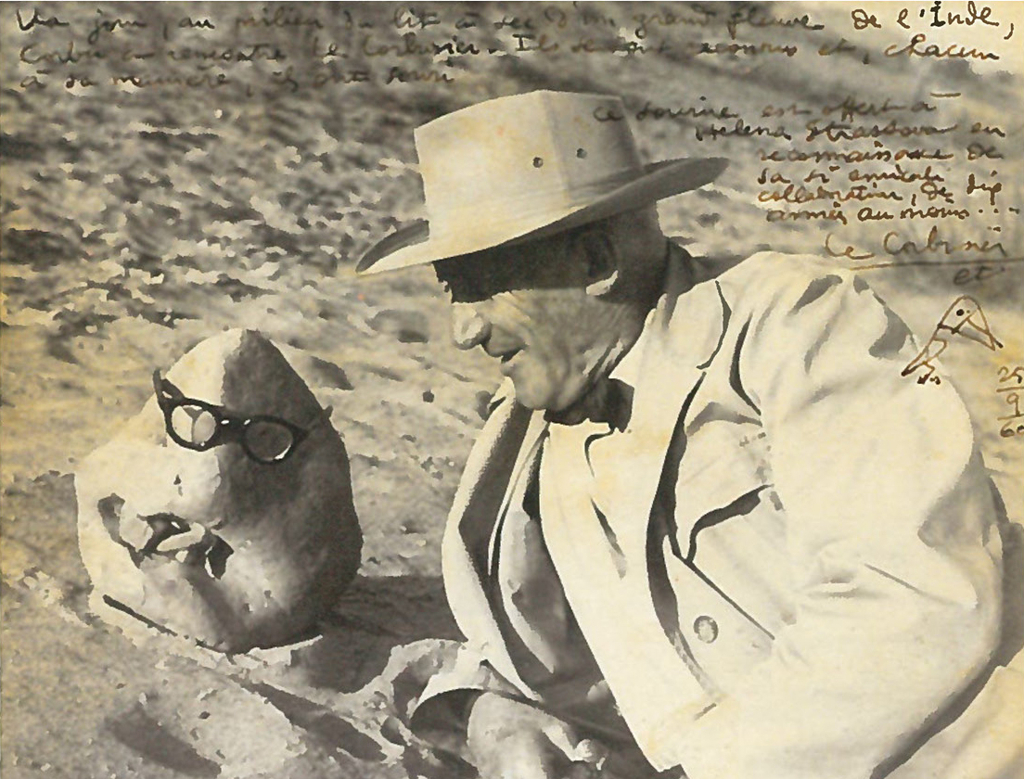 Now we celebrate the little exhibition of José Oubrerie here, which includes drawings of the Church at Firminy, adding one more amazing heart-striking works of your architecture on our now very fragile planet.  I think by now I have seen nearly all of your works of architecture, painting, and sculpture.  In my library I have collected every publication you made; thirty-five titles according to the beautiful book by Lars Müller which includes a photo of you that I believe was taken in India.  You remain a guru whose work I deeply respect, but not without curiosity about the humor in this photo.